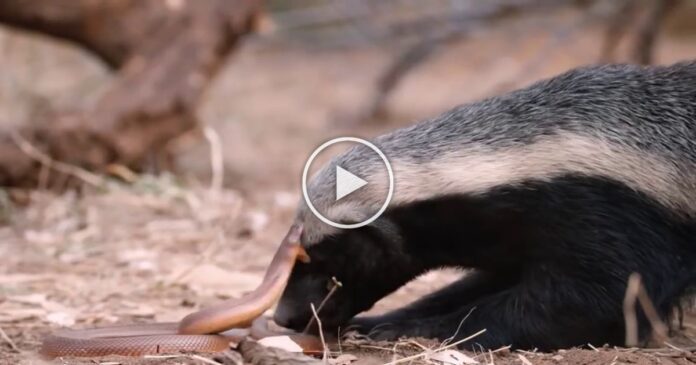 Honey badgers are known for their fearlessness. The video shows how they act freely against the Snake. Mother honey badgers provide their offspring with food, shelter, and protection until they become independent between twelve and twenty-two months.

Males are not involved in raising offspring. Honey badgers are polygamous and there is no specific period when the offspring are born. Their gestation period is six to eight weeks, and they often give birth to a litter. Many of you have seen a honey badger eat the snake with pleasure or stand up to any animal after fighting a snake. This species, which has a small body compared to many animals, does incredible things. Because of its fearlessness and courage, it is named “World’s Most Fearless Creature” in the Guinness Book of Records as “The World’s Most Fearless Animal”.

Honey badgers have long bodies and short legs; body length is between 55-77 cm, tail length is between 12-30 cm. Females are smaller than males; males weigh between 9 and 16 kg and females between 5 and 10 kg. Their skin is very loose and thick; slack gives them the ability to spin freely and fight when caught. Their fur is white or gray on the back and black down the shoulders.

Can the zebra survive the lion killing it?

Battle for the Lion Crocodile and the Cheetahs